Are you looking for a property for sale in Santiago de la Ribera with 3 bedrooms and south facing terrace?

Here we present this fabulous terraced townhouse for sale south facing with 3 bedrooms and no communal fees in Santiago de la Ribera for 86.000 €

Link to the property for sale in Santiago de la Ribera: https://www.spanishbest.com/all-properties-for-sale-in-spain/10556-Townhouse-Santiago-de-la-Ribera-Murcia-3-Bedrooms-2-Bathrooms-EUR86-000/

The property comprises of 3 bedrooms and 2 bathroom, independent kitchen, front porch and terrace and rear patio.

With its south facing orientation, the property enjoys Sun all day, either Winter or Summer throughout Spring and Winter.

On the ground floor we can find a nice size lounge, independent kitchen, rear patio, bathroom with shower and bedroom with fitted wardrobes.

On the first floor we can find 2 double bedrooms, with bathroom, and Juliet Balcony.

The property enjoys front views to a landscaped garden and pine trees, easy parking areas front and back of the property and NO COMMUNAL FEES.

It is the ideal home for permanent residence or nice long holidays with the family.

Barnuevo-Sandoval family: the parents of Santiago de la Ribera
The Torre Mínguez estate is officially considered the origin of the town of Santiago de la Ribera. It was built by Don Antonio Lisón, alderman of the city of Murcia and was passed into the hands of his heirs. One of the heirs was Doña Teresa Sandoval y Mena, who would marry Don José María Barnuevo and Rodrigo de Villamayor de Ulloa (Dignidad Trece de León of the Order of Santiago).
The couple frequently visited the Mínguez Tower and in it they projected the planning of two ambitious plans: to build a hotel and to plan the subdivision of the estate through the emphyseutic census system (perpetual assignment of an asset through the payment of an annual fee). With this system, a family could acquire the property of a lot and build their home there. Thus, in 1888 a new hamlet was born on the shores of the Mar Menor: Santiago de la Ribera, whose name derives from the membership of Don José María Barnuevo in the Order of Santiago.
The urbanization of Santiago de la Ribera
The beginnings of the urbanization of Santiago de la Ribera were painstakingly carried out by the Barnuevo-Sandoval. The marriage was not intended to achieve a mass neighborhood group, but a rational arrangement of the future settlement, drawing from the beginning the basic lines of an incipient urban concentration.
The privileged location, the climatic bonanza and the proximity of the centers of connection with the provincial transit roads, together with the facilities provided by the Barnuevo-Sandoval, encouraged many upper-class Murcian families to build their holiday homes in this place , turning Santiago de la Ribera into an incipient summer enclave for families of ancestry.
At the dawn of the 20th century, the Barnuevo-Sandoval family built their long-awaited house ‘Hotel’ and, attached to its gardens, they erected the Hermitage of Santiago Apóstol. The urbanization process of Santiago de la Ribera was already unstoppable. In 1929 the construction of the Aeronaval Base of the Spanish Navy began, on land expropriated from the Barnuevo family, and in 1943 the General Air Academy was founded. In 1968 this pilot school-base was opened for civil passenger air traffic under the name of Murcia-San Javier Airport, under joint use.
Aware of the boom that Santiago de la Ribera was experiencing, the San Javier City Council will carry out various urbanization works, street and sidewalk repairs, while some of the residents start some services such as inns, fishmongers, passenger lines and restaurants. The City Council transfers the Hermitage of Santiago Apóstol to the Bishopric, to be converted into a Parish.
Santiago de la Ribera, today
Currently Santiago de la Ribera is a tourist enclave on the Costa Cálida, whose population triples during the summer months. It has a complete commercial and hospitality infrastructure, to satisfy the needs and demands of highly centralized tourism in the summer season, but with a tendency to extend the season of stay in the town. 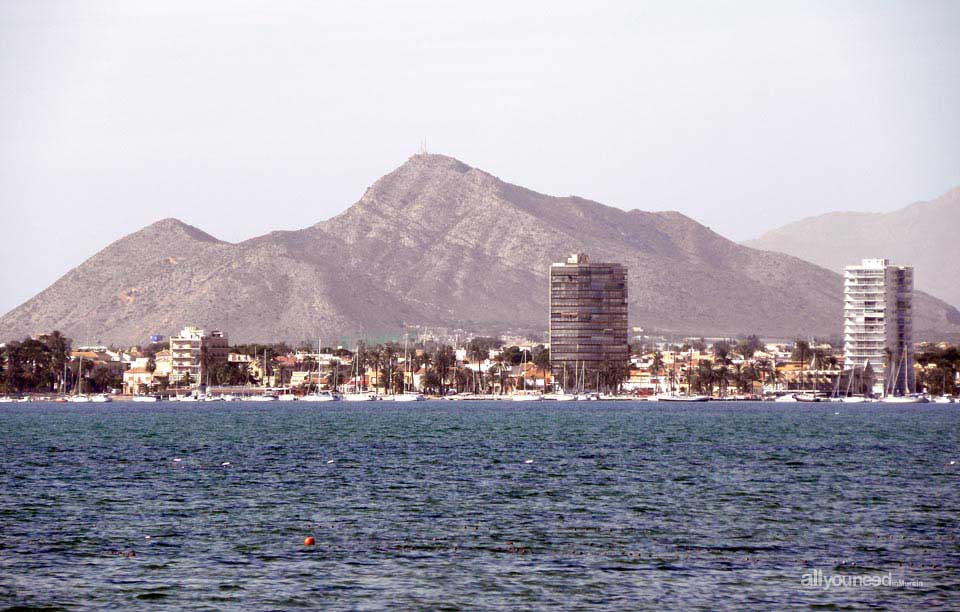 Located on the Mar Menor banks, this is a village of sailing traditions founded in 1888 by Fray José Barnuevo Rodrigo de Villamayor on one of his lots: Torre Mínguez. In a short period of time, Santiago de la Ribera turned into a summer destination for people in Murcia and its neighboring towns who built gorgeous villas by the sea. The town has four kilometers ofcoastline in high demand for those who like sea sports. Santiago de la Ribera is oriented to the service sector and to the important airforce base of Academia General del Aire.